Here are a few points you may find useful when discussing equal marriage with people who oppose it. Christians often argue that marriage has always been properly between one man and one woman. This, they say, is “biblical” marriage, and they claim that Old Testament polygamy was not endorsed by scripture and never part of God’s eternal plan.

But the idea that there’s an unchanging, divine marital template that transcends culture is easily refuted. Today’s understanding of “traditional marriage” is radically different from what the Bible actually commands. END_OF_DOCUMENT_TOKEN_TO_BE_REPLACED

We do not know what awaits each of us after death, but we know that we will die. Clearly, it must be possible to live ethically—with a genuine concern for the happiness of other sentient beings—without presuming to know things about which we are patently ignorant. Consider it: every person you have ever met, every person you will pass on the street today, is going to die. Living long enough, each will suffer the loss of his friends and family. All are going to lose everything they love in this world. Why would anyone want to be anything but kind in the meantime?

Think about that the next time you’re in a crowd. For every single person you see, young or old, there will be one death, one funeral, one grave or ash-filled urn. I work on a university campus where most of the people I pass on the street are young and healthy—and in this context the thought is jarring. END_OF_DOCUMENT_TOKEN_TO_BE_REPLACED 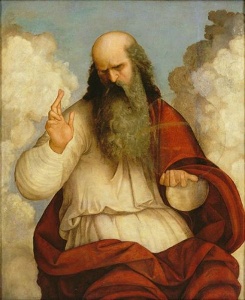 God the Father, by Ludovico Mazzolino, via Wikimedia Commons

In a previous post I wrote about the story of Noah and the Curse of Ham (which has nothing to do with the Old Testament prohibition against eating pork!). That a curse could determine a people’s fate for generations is part of the biblical notion that God shapes history. In fact, history shaped God to reflect the fears and political realities of ancient Israel. The result is the Bible’s “jealous” God… an idea that influences history to this day.

Noah’s curse fell on Ham’s son, Canaan, whose descendants had the misfortune of occupying the Promised Land without being God’s Chosen People, and were therefore slaughtered. It doesn’t change anything that this is mostly nationalistic fiction written centuries later. Simply read as a story, the tales of the conquest of Canaan are part of a sensibility that shapes the entire Old Testament and its portrayal of God. A few highlights show what I mean: END_OF_DOCUMENT_TOKEN_TO_BE_REPLACED 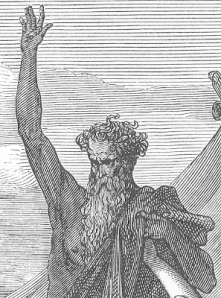 Must’ve been the hangover. Detail of “Noah Curses Ham and Canaan,” via Wikimedia Commons.

Reading one of the Bible’s oddest stories got me to thinking about the Bible’s “jealous god” and how this portrayal came to be. I’ll say more about that in an upcoming post. Right now I just want to tell the story and show how it’s been used to justify a surprising array of atrocities.

The story begins after the great flood has ended, and Noah and his family—including sons Shem, Ham, and Japheth—have come out of the ark to resume their lives. Here’s Genesis 9:20-27 (ESV): END_OF_DOCUMENT_TOKEN_TO_BE_REPLACED 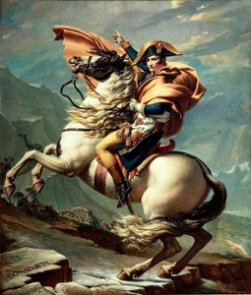 “There is only one way to encourage morality, and that is to re-establish religion. Society cannot exist without some being richer than others, and this inequality cannot exist without religion. When one man is dying of hunger next door to another who is stuffing himself with food, the poor man simply cannot accept the disparity unless some authority tells him, ‘God wishes it so…in heaven things will be different.’”

—Napoleon Bonaparte, quoted in John Merriman, A History of Modern Europe from the French Revolution to the Present, Second Edition (2004), p. 522.

Is it an accident that conservative politics keeps such close company with religion? END_OF_DOCUMENT_TOKEN_TO_BE_REPLACED END_OF_DOCUMENT_TOKEN_TO_BE_REPLACED

A woman walks into a café, orders a coffee and, before she pays, crosses off “In God We Trust” on her $20 bill. The woman is me, and scratching the motto off money is something I often do. 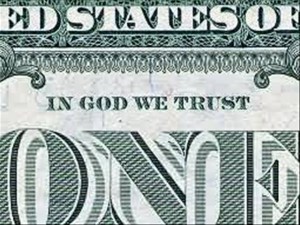 So begins Greta Christina’s column in the current issue of The Humanist. She’s writing about “How Confrontationalism Can Open Doors.” I’m usually not very confrontational myself, but the column got me to thinking about examples of mandatory or semi-mandatory acts of public religiosity and patriotism, and how resilient they can be once they’re in place. A few examples: END_OF_DOCUMENT_TOKEN_TO_BE_REPLACED